I bake biscuits.  It started off as a bit of down time and then I realised it could actually be a revision tool.

The biscuits might look like a simple picture of a spine but as I iced that I revised all the facts I needed to know about the vertebrae.  It is a bit like haptovisual drawing, it’s impossible to tell by looking at the end product what

My institute has an innovative learning week, well it used to.  It was cancelled this year – I think it was something to do with the fact that all our teaching should be innovative, not just that one week.

Last year I had floated the idea of doing a biscuit workshop and not to be deterred by the fact the event no longer existed, we pressed ahead and did it anyway.

Teaming up with out training kitchen (part of accommodation services where they teach the students to fend for themselves) we ran an afternoon workshop aimed towards medical students.

Come along and learn to bake biscuits and we will decorate them with as close to anatomically correct icing as we can.

That afternoon I experienced one of the best educational experiences I have ever seen.

Two fourth year medics turned up.  They were on their orthopaedic rotation.  The simple cutters were not for them.  They went free style with a knife.  After much debate about the structure of the femur and pelvis they produced two dough shapes.  They had gone backwards and forwards in debate to ensure they captured as many features as they could and they named them all, only resorting to an app for help once.

After baking they decided to hold this femur in place by icing on the ligaments of the hip joint.  It’s not very precise but the discussion between the two of them as to where the ligaments should go and what they were called demonstrated that they were recalling information that they had been taught long ago. 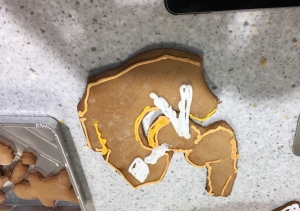 The real cherry on the top of this learning experience was when the chef came over and asked them what on earth it was.  They explained.

He then asked them how a hip replacement operation was performed.

I hadn’t expected that demonstration of revision and explanation to occur when we came up with the idea but if there was any doubt that these sort of ideas are worth it that experience has convinced me.

You can provide educational experiences anywhere. 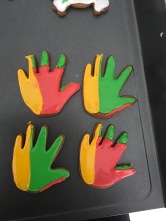