I would not describe myself as a cryptozoologist – the jury still seems to be out on what that means.

I’ve recently had an article published that used zombies to explain neuroanatomy (available here).  I asked everyone at the event to give me a zombie impression – they all stood up and did the same thing.  If zombies don’t exist then how did they do that?  We very quickly get into philosophical discussion about ‘existence’ and phrases such as ‘social constructs maintained in the societal collective’

There is a very rare (1 in 100,000 births) congenital deformity where babies are born with their lower limbs fused together.  This is called Sirenomelia or mermaid syndrome.  Its cause it debated.

Here I am talking about the mythical creature who lures sailors to their deaths – they generally aren’t nice – you need to think about Harry Potter and Peter Pan as opposed to Ariel.

Mermaids (and mermen) are another creature that almost everybody knows what they look like.  Another useful ‘in’ to describe movement and spinal musculature.

Almost everyone describes a merperson’s tail as seen in this picture. (I was going to use the statue of the mermaid from Copenhagen but it has legs).  The merperson has a lower half that is covered in scales and the fins of the tail are in the same orientation as the arms – they stick out to the sides.

They are described as being half human, half fish.

A fish has a tail that looks like this.

The fins are vertical.  The main musculature on a fish sits either side of the spine, anyone who has ever filleted a fish can confirm that.  As a fish swims it moves its tail from side to side.  There is an argument that this is the evolutionary advantage of having the left side of your brain control the right side of your body and vice versa.  When danger approaches a fish from the right, it has to contract the left side of its body to move away.  The few milliseconds advantage that it gets from having the right side of its brain control the left side of its body could mean life or death.  (This gets complicated when we appreciate that the visual field might cross over too, but I did say it was an argument, as opposed to the truth)

To use their tail in the same way as a fish, a merperson would have to swim on their side. 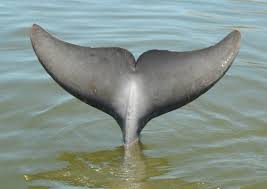 and back.  Aquatic mammals have tails that look like this and the movement in the water is up and down rather than side to side.

This is the way that merpeople are usually depicted as swimming in films.  That would make sense, the top half of the merperson is mammalian, its musculature would be at the front and back, the tail movement is usually orientated that way.

What is with the scales then?

Is the half fish bit just the scales and the appearance of the fins?  A quick look at their suggested anatomy and movement would say that they are more likely to be half person, half dolphin.

That probably doesn’t look quite so photogenic in films.

Either way, you probably will never look at mermaids in the same way again.